Project Based Learning & Young Learners: Challenging but possible. (An authentic one week course with plan of work, materials and photos from the lessons) 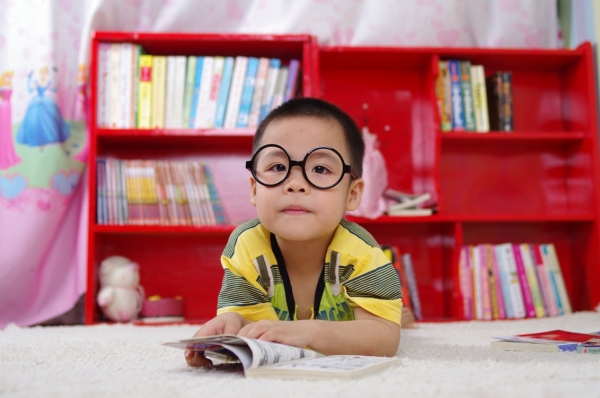 In a previous blogspot http://eltea.org/blog/how-to-implement-project-based-learning-in-your-esl-classroom I have presented the framework of a project based course and how it can build bridges between the classroom and the real world. One of the main arguments against project based courses is that they cannot be applied to young learners  as their cognitive framework and thinking capacity are still in the process of development.

Teachers sometimes get frustrated when they have to plan a course that will revolve around a real world challenge and it will be addressed to students with limited life experience and knowledge of English.

Taking into consideration that most young learners start a foreign language at the age of 5-6, we can assume that by the age of 7-8 they have acquired a low A2 level. Children between the ages of 7 and 11 are in what Piaget has called the concrete operational stage which is the third out of the four Piaget’s stages of cognitive development. During this time rational thought processes and their ability to make decisions and look for answers are sufficiently developed. At that age they also start dropping some egocentric characteristics and they find it easier to co-exist and share with others. Still, they might be reluctant to do away with ‘magical’ in exchange to reality thinking but this could be taken into account by incorporating more fantasy elements in your project.

Taking also into consideration that the project won’t be in the students’ L1 but in L2 it becomes obvious that the students will need more guidance by their teacher. The latter also needs to have a rough idea of how the whole project is going to unfold as the young learners do not get as much  freedom as the older students, who basically lead the whole project. Finally, the teacher needs to monitor closely in order to make sure that everyone is on the right track.

Below I will present the framework of a one-week project based course with a group of 12 Chinese students aged from 6 to 10. The age and the nationality of the students might sound intimidating to some teachers but as we all know students can surprise us in the most unexpected ways.

This is how the week unfolded: 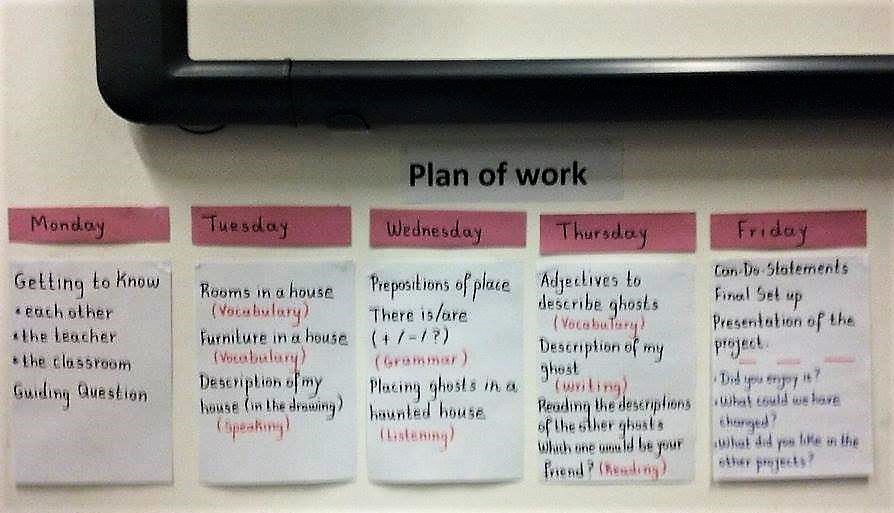 As it has already been mentioned here http://eltea.org/blog/how-to-implement-project-based-learning-in-your-esl-classroom,  a project-based course is framed by a guiding question. Assuming that the young learners enjoy getting messy and using their hands, I had decided to base my project on British food. When the students entered the classroom, I introduced myself and I asked them if they liked their classroom and the school. The students seemed to be amazed by the fact that in the grounds of the school there was a cemetery. So from the very beginning of our first lesson they started bombarding me with questions formed by single words in rising intonation. ‘Dead people?’, “Ghosts?’, “Ghosts in the school?’, ‘See ghosts?’

One of the main principles of PBL is that it answers a real life  question and at that exact moment the students burning question was if there were ghosts in the school and where they were.

I think that we as teachers struggle to come up with a guiding question for young learners because we try to think of  real life issues that we can also relate to. I really didn’t care if there were ghosts in the school or if ghosts really existed but for that group of students knowing the answer to such questions meant the world to them.

So obviously my pre-planned project on British food was ditched and the guiding questions of the week were the following: Do you believe in ghosts? Where do ghosts hide? 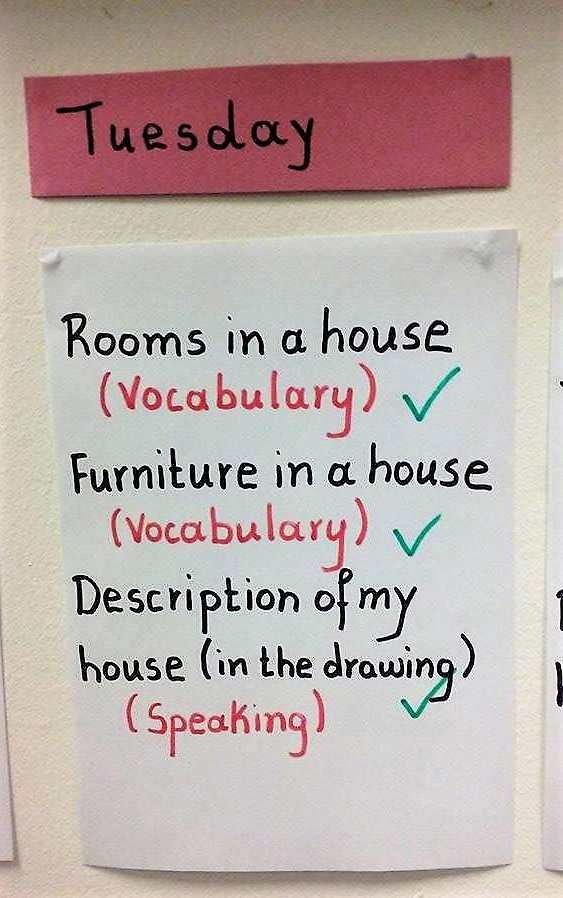 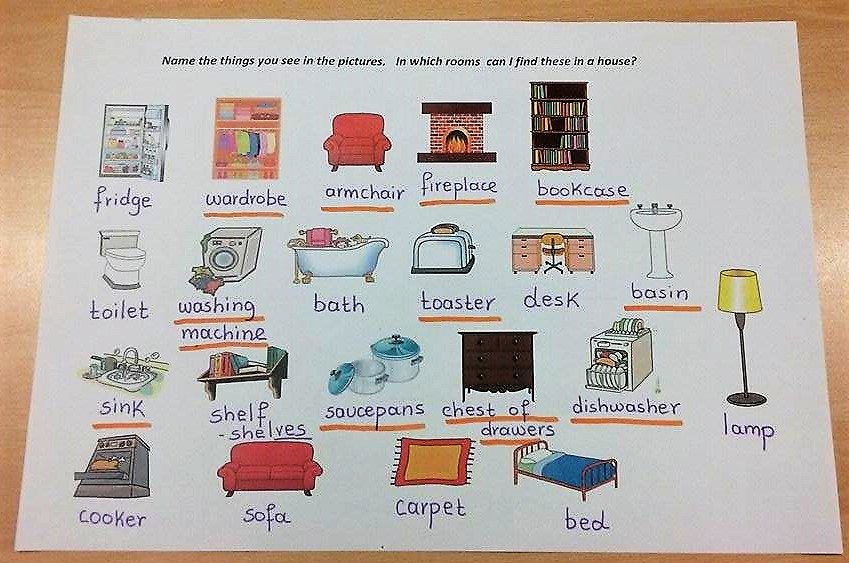 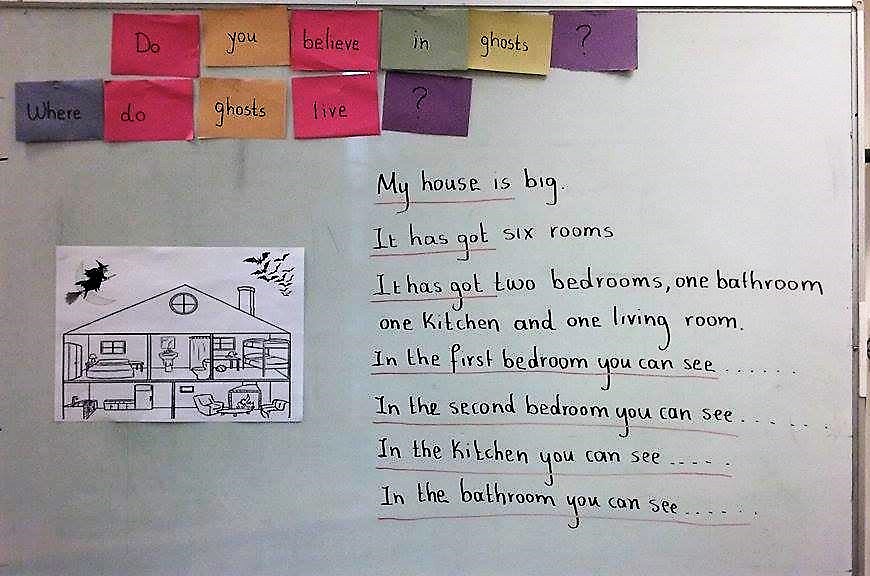 On Tuesday the students were asked to draw on an A3 piece of paper a house with all its rooms and everything there was in the rooms. A model was provided on the board so that all students knew what to do.
There was lots of vocabulary practice on the things we can find in a house and towards the end of the lesson the students presented the house they had drawn to the whole class. 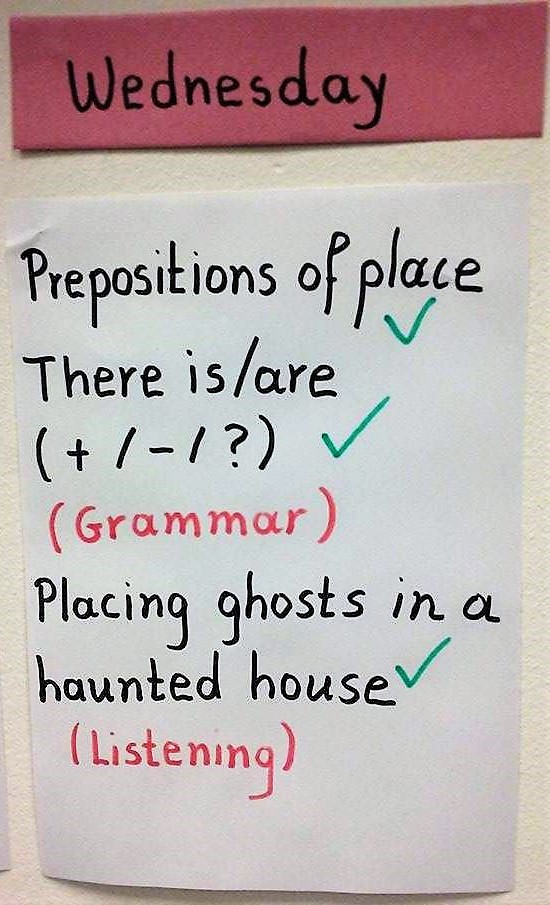 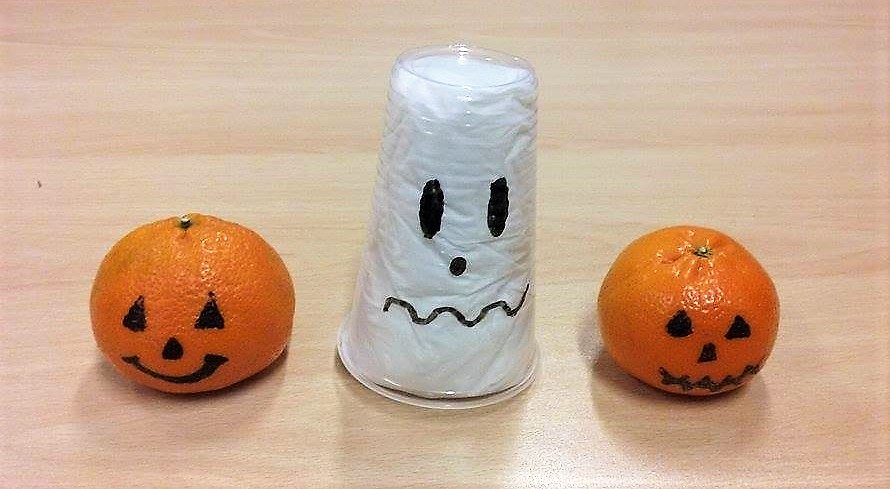 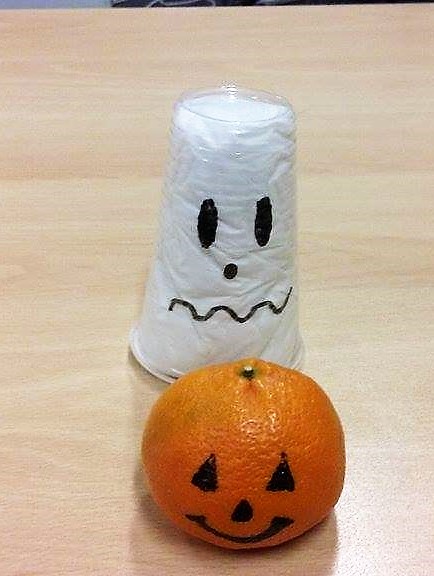 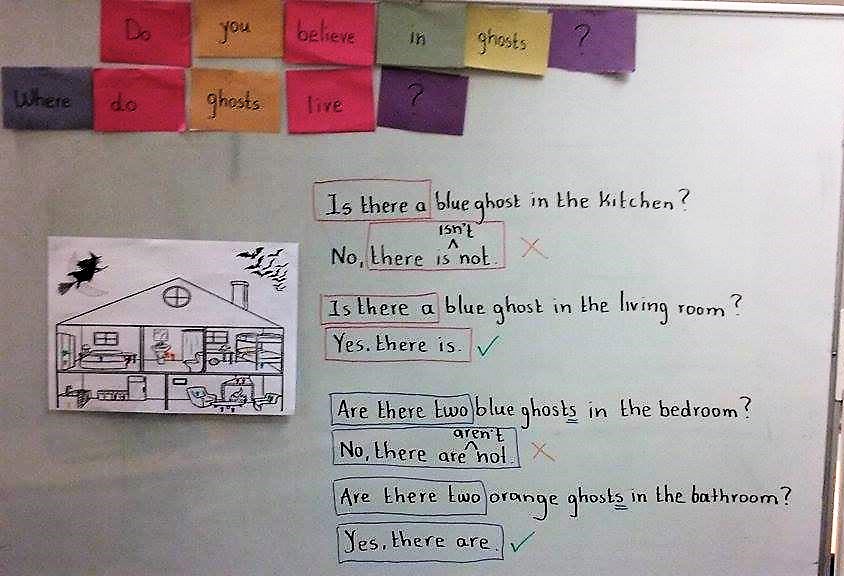 On Wednesday the students practised the prepositions of place and discussed where in the school/classroom the ghosts could hide. They were introduced to There is/There are and they practised using their drawing from the day before. Finally, they were given the picture of a house where they placed ghosts following the teacher’s instructions. 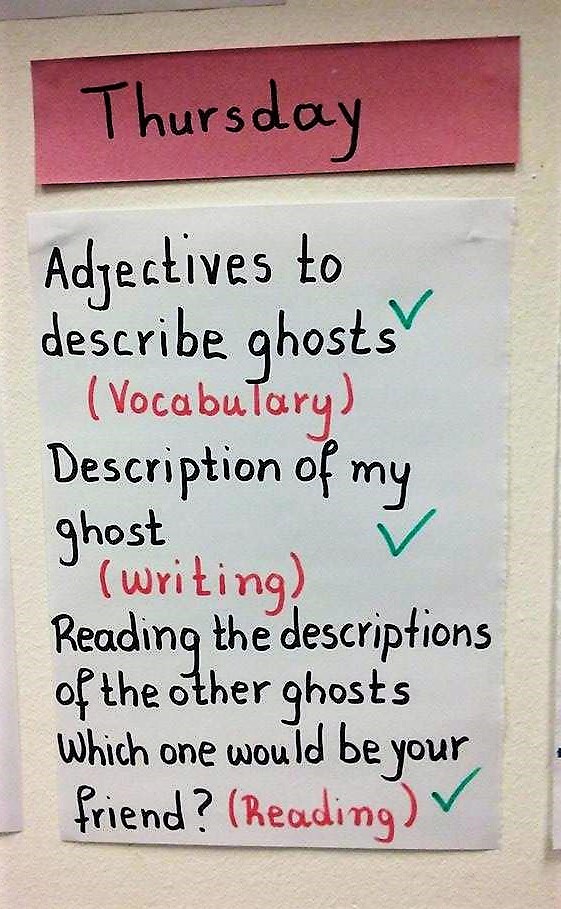 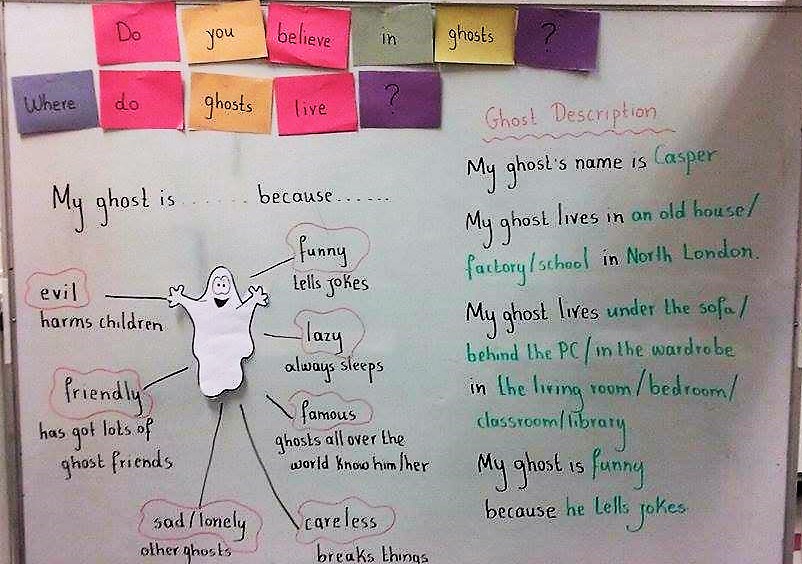 On Thursday the plan was to come up with adjectives that could describe ghosts and I was thinking of words like scary, invisible etc. However, the students focused more on personality adjectives because they were looking for words to describe their own ghosts. Going down the path the students had chosen (focusing on personality adjectives), they wrote a description of their ghost after having seen the model on the board. After they had finished, the students read silently the descriptions of the other ghosts and decided with which one their own ghost would have become good friends. 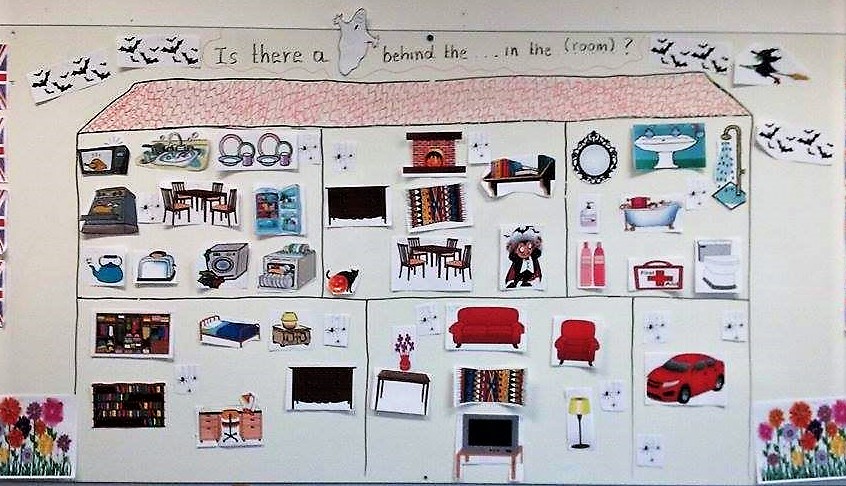 On Friday the students revised what they had been doing all week and set up their project. One of the key features of a PBL course is the final outcome to match the guiding question and to be presented to an audience.
So the students decided to draw a big haunted house on the board and in each room they stuck photos of things people can find in each room (the flashcards they had practised on Tuesday). The students wrote the name of their ghost in a small ghost picture and stuck/hid it behind a thing in the house they had drawn on the board.
When the other students (the guests) came to see their project, each student (the hosts) talked about his/her ghost (the description they had written on Thursday) and asked the guests to guess where his/her ghost was.

Eg: Guest: ‘ Is there a ghost behind the sofa in the living room?

Upon reflection, despite the initial concerns the project did come off. The students had the chance to practise all four skills throughout the project and they examined an issue they were genuinely interested in. This turned out to be an enjoyable experience for this group of young learners but indeed in the past there were also projects that did not work with young learners. But throughout my teaching career there were projects that were addressed to teenagers and adults that also did not work. It is not an issue of age. A project can fail due to many other reasons. It might be the choice of the topic, the lack of motivation or the group dynamics of a class. Despite the teacher’s good intentions, projects do fail just like any other kind of lesson. They key issue for the teacher is to examine why. PBL can be applied to all age groups provided the content of the course matches the students’ interests and expectations and any failure should not deter the teachers from experimenting with PBL or any other new approach.

If you want to see a PBL course with teenagers, have a look here http://eltea.org/blog/project-based-learning-and-teenagers-demanding-but-rewarding-an-authentic-one-week-course-with-plan-of-work,-materials-and-photos-slides-from-the-lessons