Project Based Learning and Teenagers. Demanding but rewarding. (An authentic one-week course with plan of work, materials and photos/slides from the lessons) 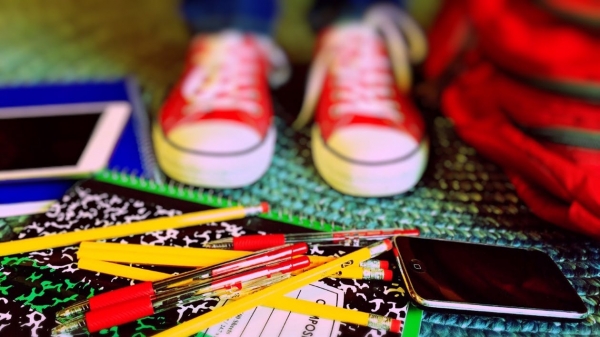 Anyone who has taught teenagers knows that they come with their own teaching challenges, such as lack of interest, poor discipline, scant attention and frequent mood swings. Teachers might work their fingers to the bones and still come up against a brick wall. Teaching teenagers is undeniably hard work and therefore they are not usually welcomed by most teachers.

However, before we get our pitchforks ready and label them as lazy and uncooperative, we, as teachers, ought to make an effort to understand them. We have all been in their place and we do remember all the sudden changes in our lives, mood and feelings. We were all quick to blame the hormones but neuroscience gives a further explanation. In her book ‘Why are teenagers so Weird?’ Barbara Strauch mentions that during adolescence the teenage brain undergoes great changes. The frontal part of the brain that is related to logic and emotions is being rewired during adolescence and the assumption that the reconstruction of the neurons is responsible for the teenagers’ lack of concentration and stubbornness seems valid.
Knowing the characteristics of this age group is an asset that enables the teachers to build bridges between themselves and their teenage learners and finally maximize language learning. Adopting a positive attitude and appropriate techniques can significantly influence the effectiveness of the learning process and offer a learning experience that learners can relate to.

One element that hinders constructive language learning among teenagers is the neglect of their needs and interests. As it has already been mentioned, what is often the case-mostly because of their rebellious nature-is the misconception that the students who are eager to learn, will and those who are unmotivated and indifferent won’t no matter what. However, the main aim of a teacher who works with teenagers is not only to inspire and involve those who seem disengaged but also to offer an enjoyable and rewarding learning experience to the students who seem more excited to learn and participate. When such factors are taken into consideration, teenagers can work wonders. The methodologist Penny Ur refers to teenagers as ‘the best language learners’ who if they are engaged , not only become passionate with what they do but they also feel committed to work harder and get the most out of the lessons.

Taking all the above into consideration and also the fact that teenagers like projecting themselves, looking for peer approval , we can assume that project based learning might be ideal for this age group. This is because project based learning is a personalized learning approach which focuses on the students’ personal interests and language needs. The students examine the language through topics that they themselves consider interesting and that alone can catch the students’ attention and turn them into more active learners. Once the teenage learners get engaged, language learning takes its course and the teacher acts as a facilitator and prompter.

Below I will present the framework of a one-week project based course with a group of 12 mid-Intermediate South American students, 8 female and 4 male aged from 15 to 17. Despite my initial concern that the project would fail for reasons I will explain below, it turned out to be a success.

This is how the week unfolded. 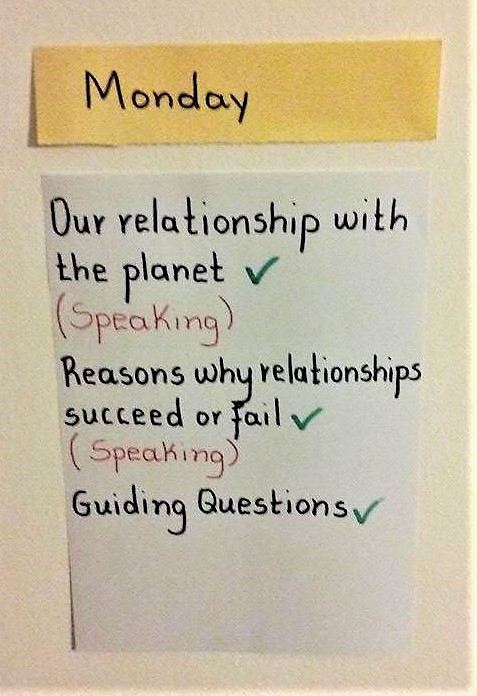 Although this was the first day of our project, it was not the first time I met the students as I had taught the exact same group the week before. They were a group of very lively and outgoing teenagers who were enjoying their first time in the UK during their school break. They were keen on learning but just like all teenagers they were also eager to mix with other nationalities, make new friends and flirt.

The school’s theme of the week ‘Planet Earth’ left them rather disappointed as later this week on Wednesday it was Valentine’s Day and they really did expect-surprisingly enough the boys did too-that the theme of the week would be around this holiday. Their reaction did not take me by surprise as they had been asking about Valentine’s day since the previous week. The school’s theme could not change but neither could the students’ interests be ignored.

As it has already been mentioned here http://eltea.org/blog/how-to-implement-project-based-learning-in-your-esl-classroom a project based course is framed by a guiding question and towards the end of the lesson we came up with these two: ‘How can a romantic relationship resemble our relationship with the planet? How can we compensate the planet for all the harm we have caused?’ 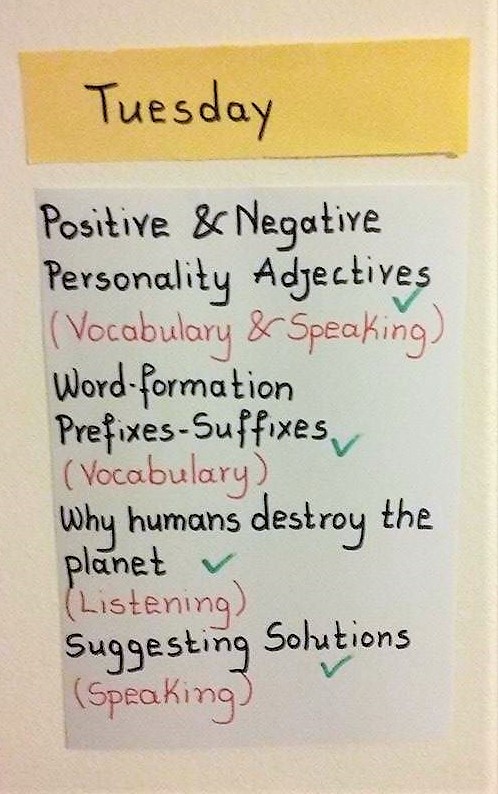 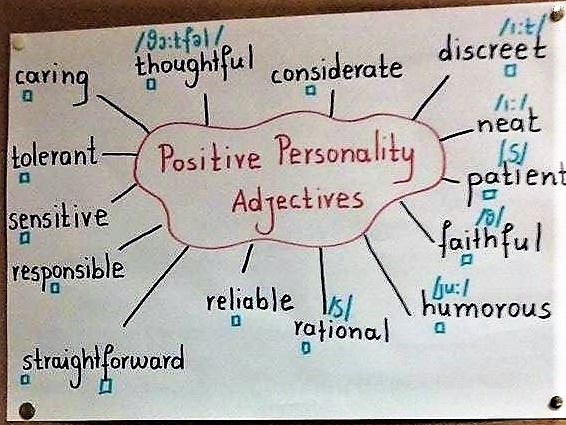 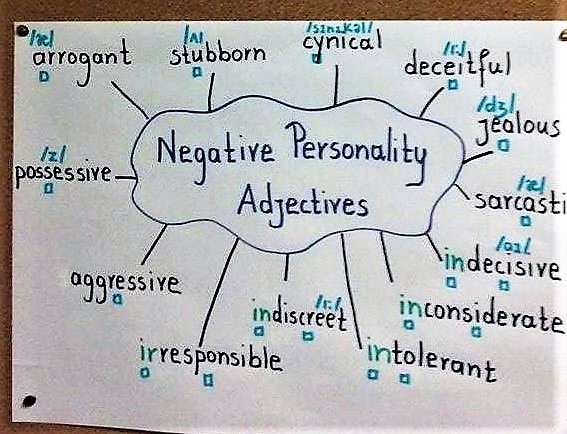 On Tuesday the students discussed what qualities people are looking for in a partner and they justified their answers by giving examples. The students revised personality adjectives, both positive and negative, and added new ones to their vocabulary. They also focused on the common prefixes and suffixes used to form adjectives and opposite words. Later the students used some of these adjectives to describe our relationship with the planet.

E.g.: We’ve been thoughtless and selfish because....

The students also noticed the repetitive use of the word ‘harmful’ and they looked up for synonyms to add to their notebooks, such as ‘disastrous’, ‘ferocious’, ‘vicious’, ‘inhumane’, ‘merciless’, ‘ruthless’.
During the second part of the lesson, the students watched a silent animated video that examines our relationship with the planet https://www.youtube.com/watch?v=WfGMYdalClU  . Based on what they saw, the students discussed how people harm the environment and brainstormed solutions. Finally, they listened to the audio of a video  https://www.youtube.com/watch?v=gUhxcdzRgLQ where solutions were suggested and the students checked if they had similar or different ideas. If the students have problems, you can choose to show them the video as subtitles are also provided. 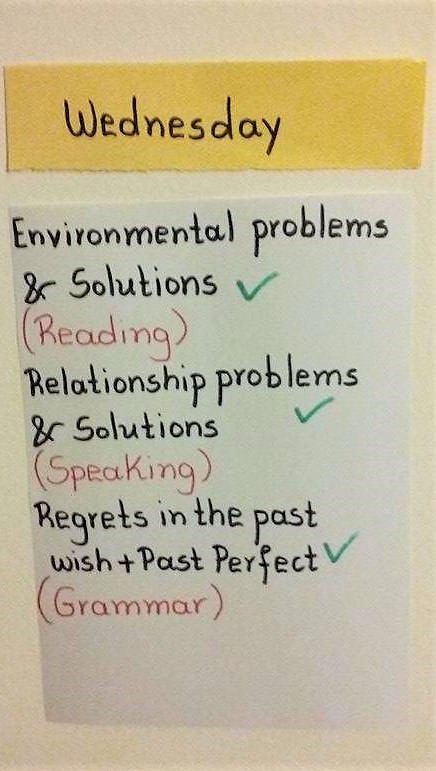 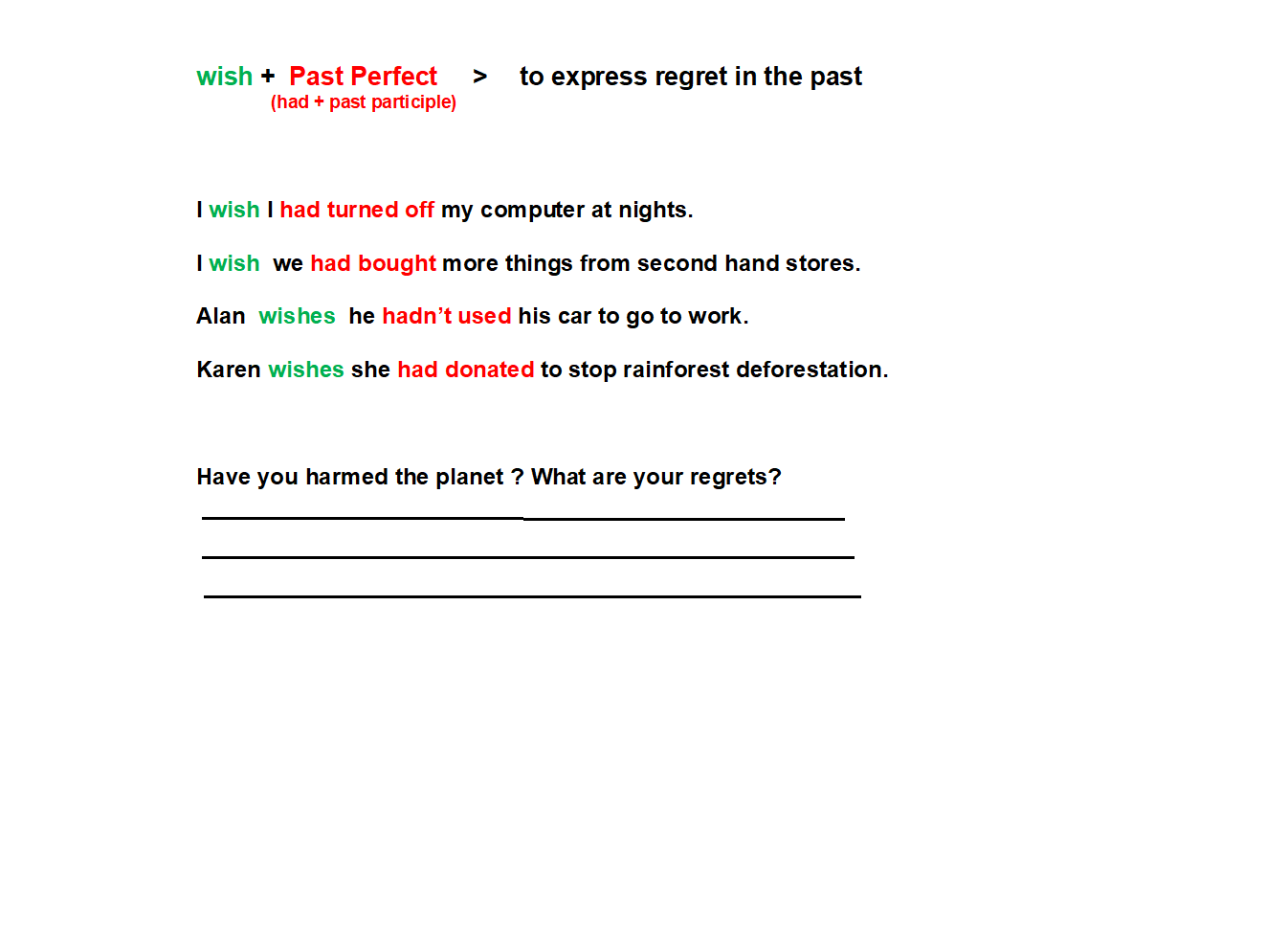 On Wednesday the students read a text where they matched environmental problems to solutions in order to consolidate what they did the day before.

Next, the students brainstormed what problems couples usually face and what might be the possible solutions. For reasons of convenience, we also used the imaginary couple we created on Monday. Finally, the students examined how people can express regret in the past and produced examples both related to the planet and romantic relationships. 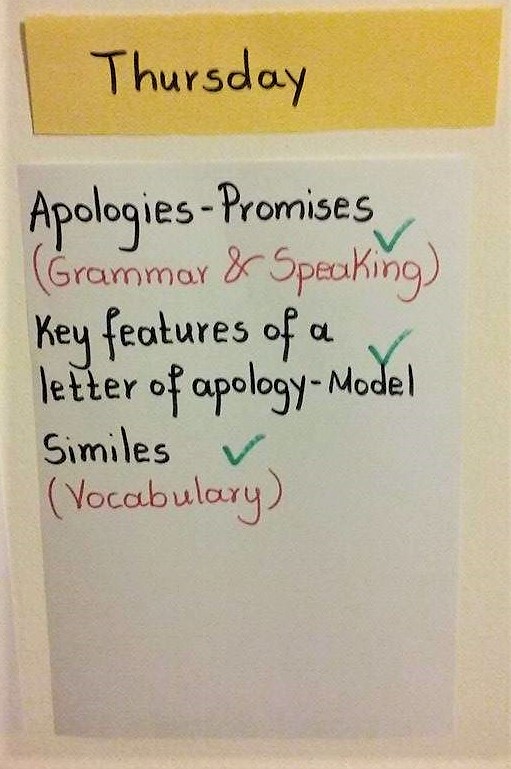 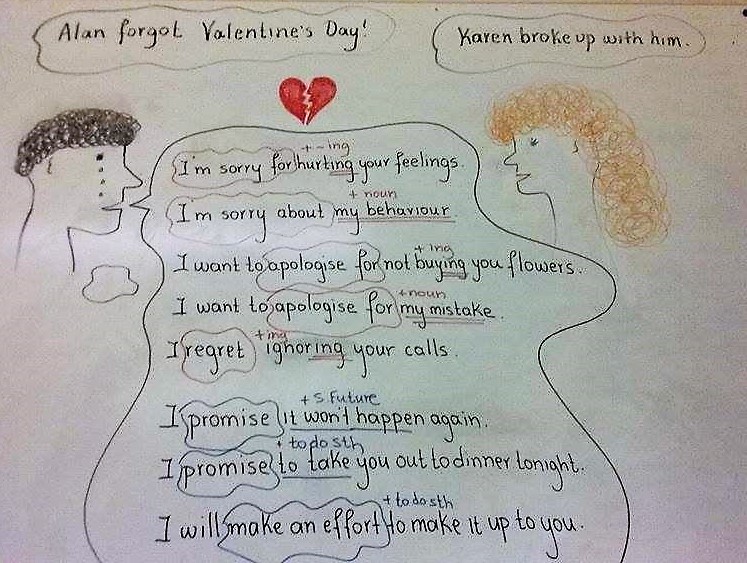 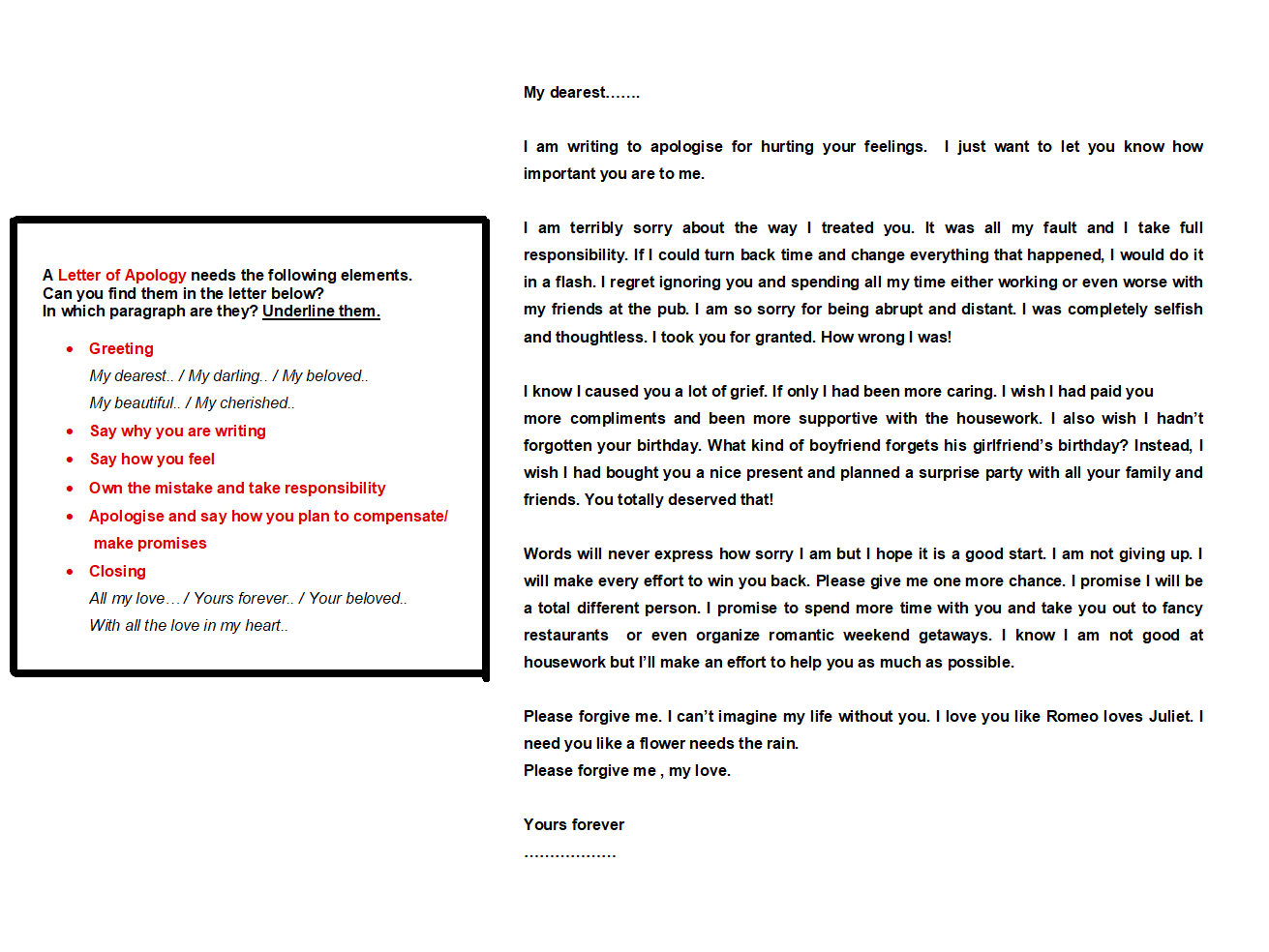 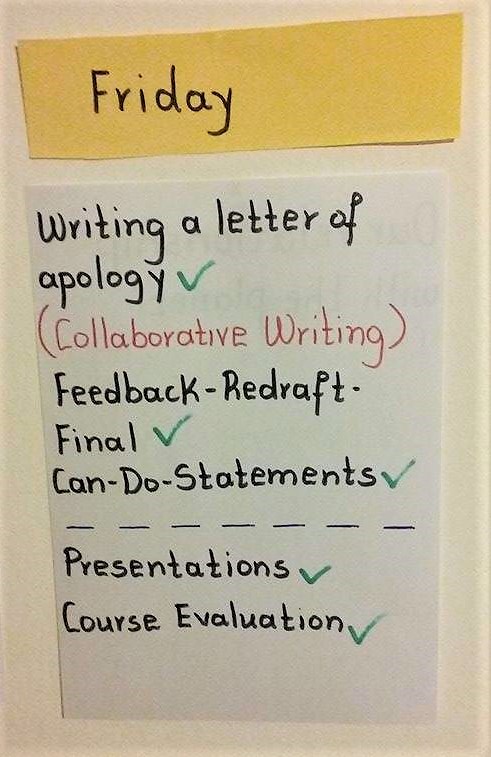 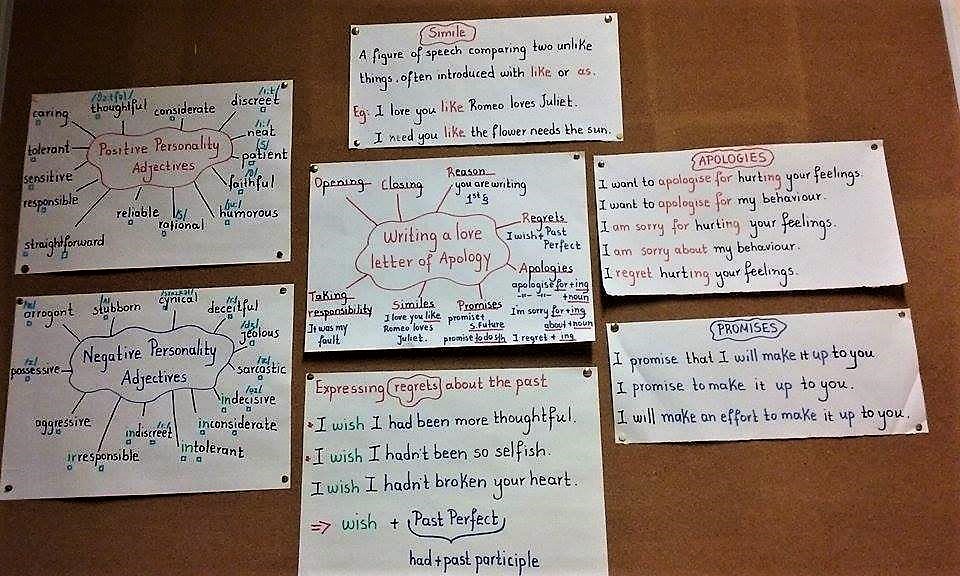 On Friday the students wrote in groups a letter of apology to the planet. They produced a first draft and they used the computer room to write the final letter which you can see below. It’s obvious that the students got creative by adding pictures and while some had a romantic approach, others chose a more humorous one.

When the students from the other classes (the guests) came to see their project, they had to read the students’ letters and decide if they accept the apology or not or if they need more time to think. 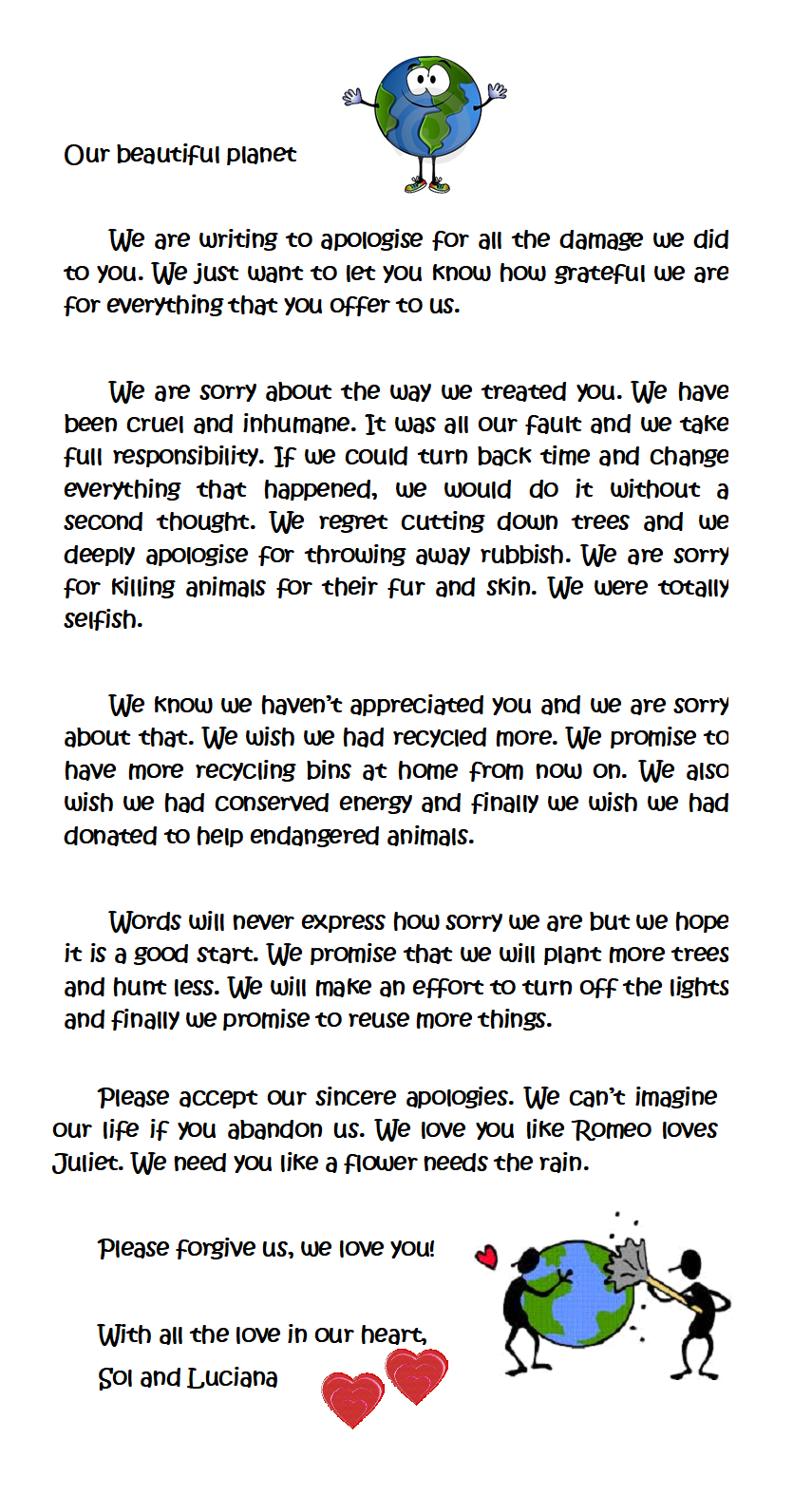 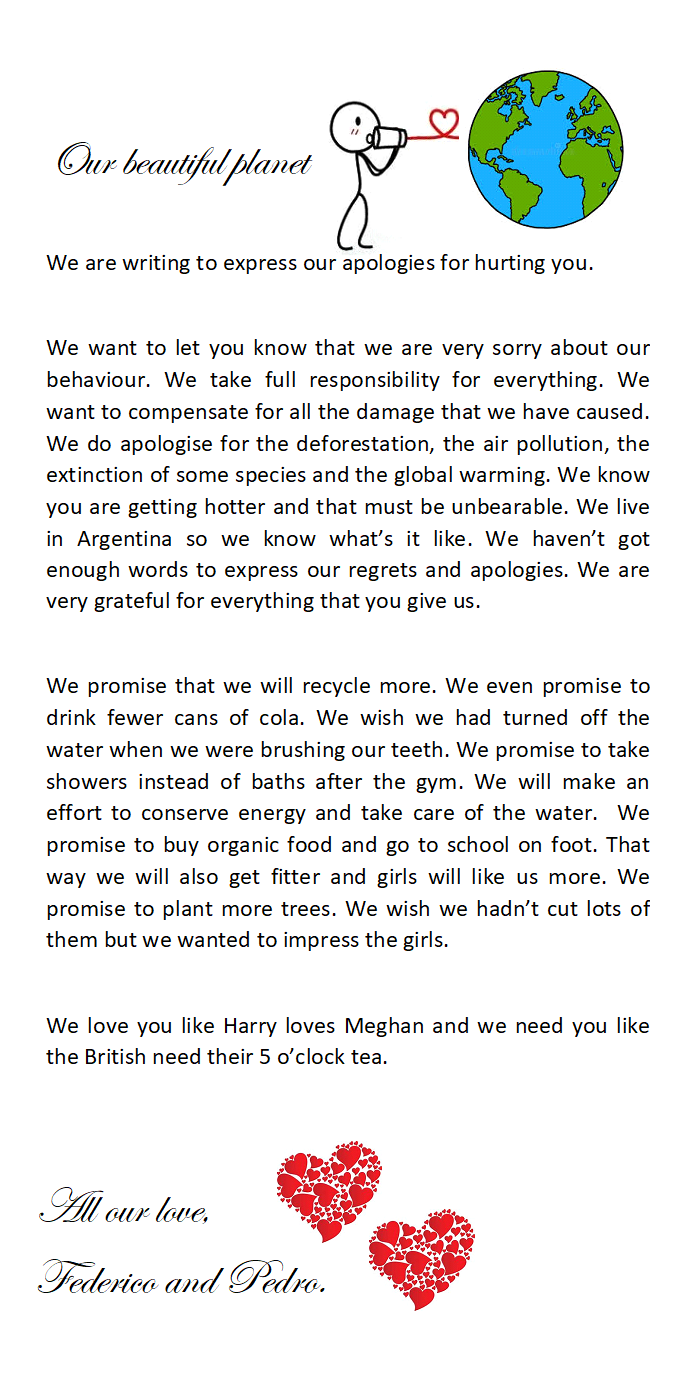 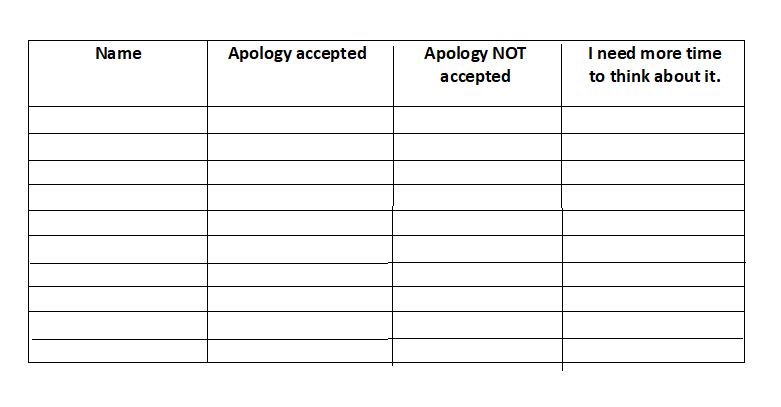 Upon reflection one might argue that the final outcome is not a real world task as the PBL suggests it should be. In real life nobody would ever write a letter of apology to the planet. This is indeed a fair point. However, since in this case the interests of the students did not match the school’s theme, there were only two options. Either to ignore the students’ interests, something that totally contradicts the principles of PBL, or to slightly deviate from the norm. After all, although the students will never write that same letter in real life, the language they used in this letter is useful and applicable in real life. the students had fun working on their project and practised useful language items/functions that were also able to use for their final outcome.

There is no doubt that teenagers are a demanding age group but seeing their whole transformation and development taking place in front of your eyes makes it one of the most rewarding experiences in your teaching career. I do feel that teaching them has trained me to observe my learners before making any teaching decision and to develop as a teacher.

If you want to see a PBL course with young learners aged 6-10, have a look here http://eltea.org/blog/project-based-learning-young-learners-challenging-but-possible-an-authentic-one-week-course-with-plan-of-work,-materials-and-photos-from-the-lessons