A selection of ESL activities including step by step descriptions, illustrations and posters. Your comments and feedback are highly appreciated.

Icebreakers for kids, teens and adults (with images)

A. The Name Game 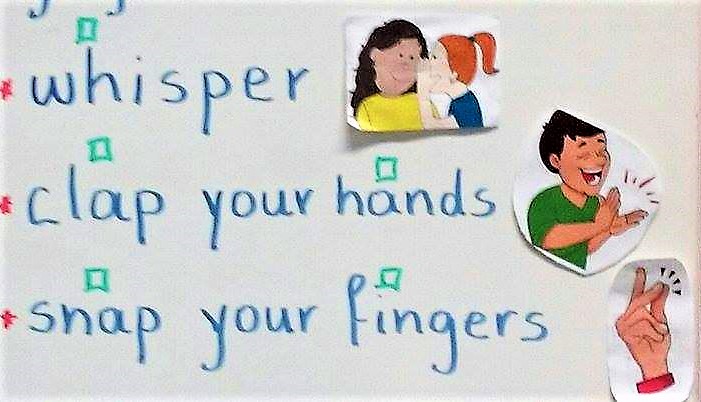 Place in front of the students 3 cards that show the following actions: a) whisper b) clap your hands c) snap your fingers. The cards should be upside down so that the students cannot see them. Ask each student to choose one and turn it over. Now the students have to say their name and something they like, e.g. My name is Annie and I like summer however the card they have chosen tells them to do so. They can whisper it, they can say it by rhythmically clapping their hands or snapping their fingers. It’s highly recommended to demonstrate and practise all three ways before the students start. Once all students have a go, ask them to choose another card (now there are just two cards on their desks) and do the same. This time they can say something else about themselves, e.g. another thing they like or don’t like. Do the same with the last card. Once they have said their name in all three ways turn it into a competition by asking questions like, ‘Who remembers all names?’, ‘What does Mary like?’ etc and give stickers or stamps. It’s also a good idea to let them know about the game in advance so that they have a reason to pay attention to everyone.

If you want to make it even more fun, the rest of the students can repeat it in the way the card they have chosen tells them to do so. So, some students will be whispering, some will be clapping their hands and some will be snapping their fingers. It can be quite loud but still lots of fun.

B. Discovering your classmate 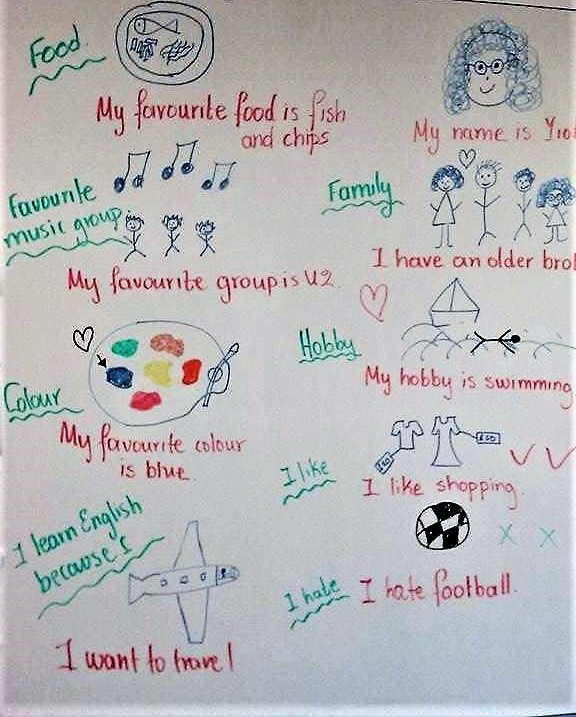 Draw on the board a picture of you and write your name underneath. Then, draw things that are related to you and give them prompts. For example, write Food and next to it draw your favourite dish. Split your students in groups and ask them to discuss what they know about their teacher based on what’s on the board. When you elicit the answers, write the full sentences on the board.

Now that the students have a model on the board, ask them to do the same about themselves on an A4 piece of paper. Give them coloured markers and plenty of time as they love drawing. Once they finish, ask them to swap papers and see what they can discover about their classmates. During feedback discuss what they have in common. Finally, ask the students to leave their A4 pieces of paper in class and stick them on a wall to create a class profile. Remember to give them back at the end of the course. 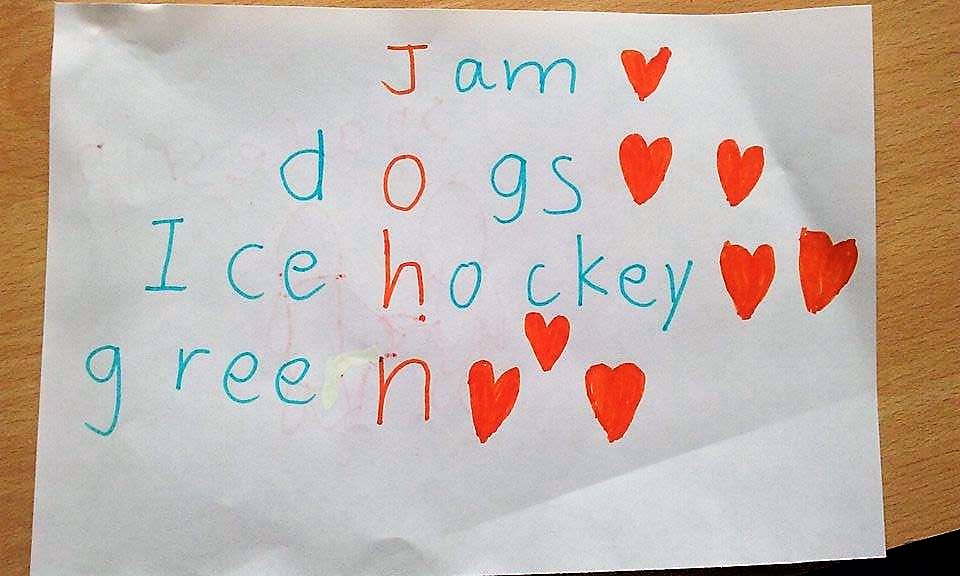 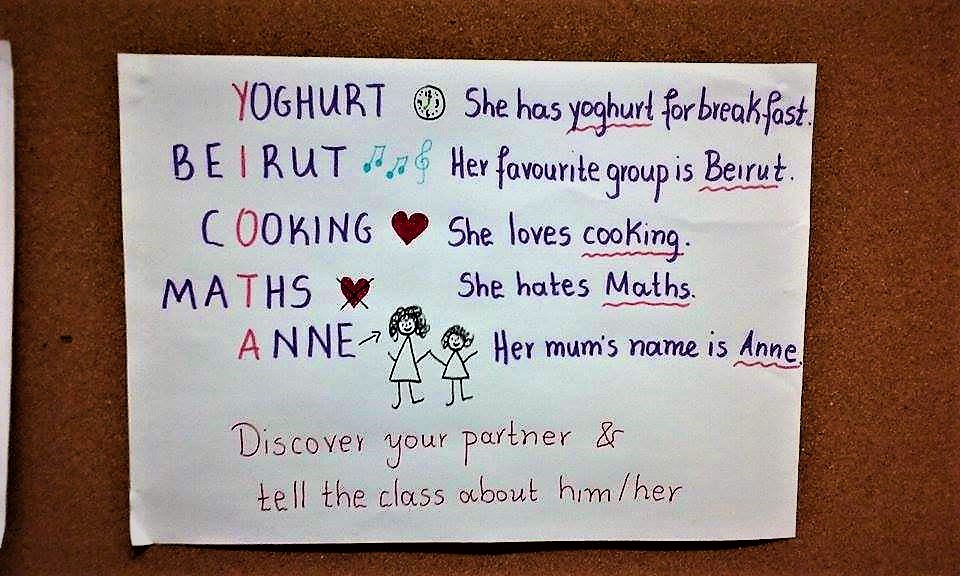 Another variation could be to write their name vertically and use the letters of their names to write things they like. The words they choose to write don’t have to start with the letters of their name. That is difficult and restrictive as the words they choose to write might not represent them.One of my groups came up with a better idea and they drew hearts to show how much they liked them. They drew one heart if they just liked it, two if they liked it a lot and three if they loved it. I found their idea brilliant and I decided to keep it. If you have young learners in a higher class, you can even adapt it and use phrases such as ‘I am keen on’, ’I’m fond of’ etc.Obviously inspired by my students’ idea, instead of hearts I drew pictures that could help somebody decide what these words reveal about me. Whichever you choose, give the students the chance to have a look at all of them either by passing them around or on a wall display that will later be used as a class profile. Let the students see/discuss what they have in common.

Obviously inspired by my students’ idea, instead of hearts I drew pictures that could help somebody decide what these words reveal about me. Whichever you choose, give the students the chance to have a look at all of them either by passing them around or on a wall display that will later be used as a class profile. Let the students see/discuss what they have in common.

This is an icebreaker that you could use when the students know each other a bit but you don’t know them. Prepare strips of paper that write: ‘What most people do not know about me is...’. Give one to each student and ask them to finish the sentence and write their name on the top. Once they finish, ask the students to pass them hand in hand from one person to the other until they get theirs back. Ask students by which one they were most impressed by and what additional questions they would like to ask the other students. This will probably initiate interesting discussions as all students become more motivated when they talk about themselves. 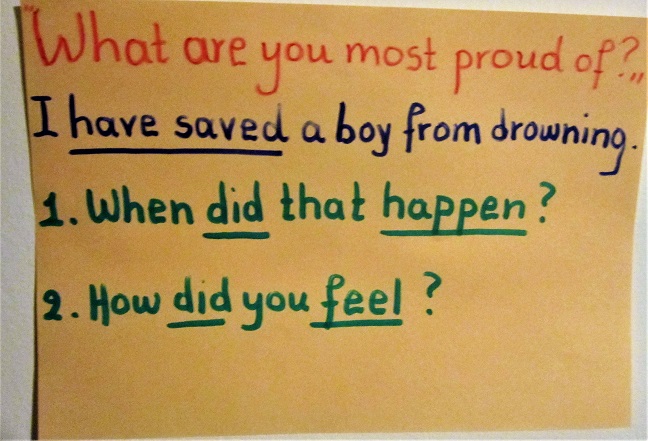 Write on the board. ‘ I have saved a boy from drowning.’

Tell the students that this is your answer to a question somebody has recently asked you. Ask the students to discuss in pairs/groups what they think the question was. If after several attempts the students can’t find the exact question, give it to them. Write the question above the answer on the board. The question is ‘What are you most proud of in your life?’. The students will probably be impressed by your achievement and they will be intrigued to find out more by asking additional questions. Ask the students to write down something they are proud of and later ask them to go around the class and ask their classmates what they are proud of. When their partner answers their question, they can ask them two more additional questions. Set a time limit and ask them to speak to as many as possible.
This activity lends itself to some language instruction as well. Point out that the answer to the question is going to be in Present Perfect, e.g. I have saved a boy whereas all the additional questions will be in Simple Past, e.g. When did this happen? How did you feel? Make sure you have a model on the board for the weaker students.

The icebreakers described in teenagers can also be used with adults as they are mature enough and they also allow some language instruction.

A. Make a guess 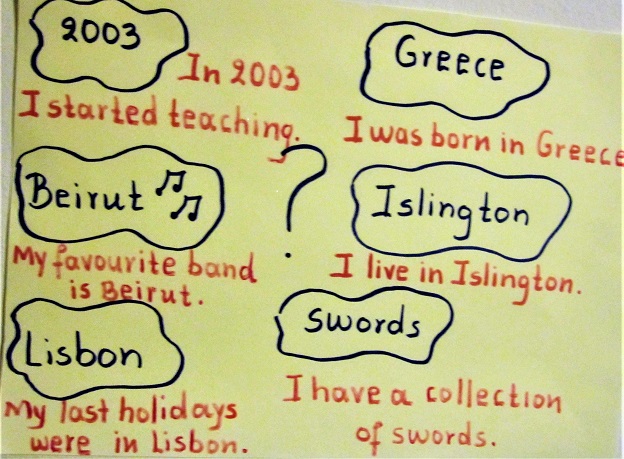 This is quite a common icebreaker that seems to work well with adults. It is short and it can initiate interesting conversations. Write on the board people, things and dates that are related to you and ask the students to guess how they are related to you. Have one or two ambiguous items in order to spark interesting guesses. First give them some time to discuss in pairs and later as a whole class. Remember to write the correct guesses on the board. With the model on the board ask the students to do the same. Tell them that they can write as many as they want ( ideally between 3-6 items) and they can be as revealing as they also want. Once they finish, they swap papers with the person next to them and they start making guesses.

B. Language learning beliefs and attitudes

As adults do come to class with specific expectations, it’s a good idea to discuss their attitude towards language learning and possibly their learning style.

Start with something more general by asking them to discuss the following quote: 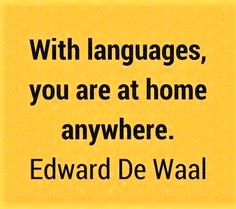 Then, ask them to discuss whether they agree or disagree with the following:

a. If you want to learn a foreign language, you need to memorize vocabulary and grammar rules

b. I want to improve my speaking skills, so grammar is not that important.

c. The teacher should correct all of my mistakes, otherwise I won’t improve.

Give them some time to discuss in groups and then as an open class.

Finally, reorganize the groups and give them some open ended questions, such as the following:

1. How would you describe the language teaching in your country?

2. What should be the elements of a successful lesson?

3. Do you have a method that helps you learn better?

4. When you learn a foreign language, besides the language what else do you learn?

It’s really important to know your students’ attitude towards language learning early on in order to adapt your teaching accordingly or explain what you do differently so that your students know what to expect.
It would also be a good idea to ask them to write their course expectations on post-it notes and stick them somewhere in the classroom. At the end of the course check how many of those have been fulfilled.

How about designing your own icebreakers? Before you do,you might want to have a look here: http://eltea.org/blog/icebreakers-it-s-that-time-of-the-year-again